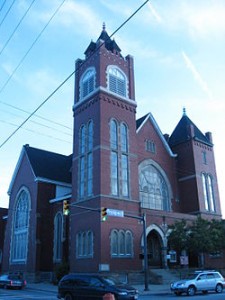 Zion Lutheran Church is an historic church on the east side of Cleveland.  Aside from being home to a venerable congregation that dates back to the early 19th century, Zion Lutheran has a peculiar claim to fame among America’s churches.  According to both tradition and historical records, it was the first church in the United States to display a fully illuminated and ornamented Christmas tree during the holiday season.  The display, which in its first year was considered to be scandalous, became a national craze the following year.  Zion Lutheran Church has subsequently become a minor pilgrimage destination for lovers of Christmas trees, one of America’s favorite holiday traditions.

The location and party responsible for America’s first Christmas Tree is a matter of some conjecture.  Virtually every source agrees that Christmas trees were introduced to the United States by German immigrants.  The earliest known claim is that Hessian soldiers erected a tree in Connecticut as far back as 1777.  Other traditions suggest that the first Christmas tree appeared in Boston, or somewhere in eastern Pennsylvania.  But the earliest known documented, fully decorated Christmas trees appeared in the area of Cleveland, Ohio around the mid-19th century. 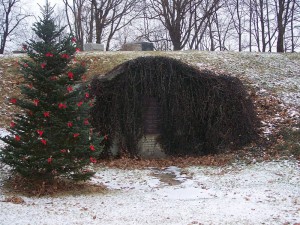 In the town of Wooster in 1847, a German immigrant named August Imgard set up a spruce Christmas Tree in his home and decorated it with paper ornaments.  A local tinsmith fashioned a star for the top.  As the piece de resistance, Imgard adorned the tree with candy canes (he is recognized by the National Confectioner’s Association to be the first person to ever do so).  Every year during the holiday season, a pine tree overlooking his gravesite in the Wooster Cemetery is illuminated with Christmas lights in honor of Imgard’s contribution to America’s Christmas tree tradition.

A few years later in 1851, not too far away in Cleveland, another German immigrant and pastor named Heinrich Schwan placed a Christmas tree inside the Zion Lutheran Church.  This Christmas tree made history twofold: first, it was the first Christmas tree west of the Atlantic to be placed inside of a church; and second, it is believed to be the first American Christmas tree to be illuminated by candles. 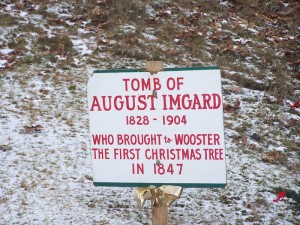 The tree, which initially caused a scandal, kicked off a Christmas tree craze the following holiday season.  In 1852, the festive trees appeared all over Cleveland.  By 1855, they were all over America.  Zion Lutheran Church still boasts a beautiful Christmas tree every year.

The first Zion Lutheran Church was built in 1848, and it was here that the first Christmas tree was displayed.  Due to the growth of the church, the congregation moved to a larger space in 1856, and finally to the current building, which was completed in 1903.  Although the original church building is now gone, the Christmas tree tradition continues in the current facility.

Cleveland’s other popular Christmas tree site is the grave of August Imgard in the Wooster Cemetery, approximately fifty miles south of Cleveland.  The tradition of decorating a pine tree over his gravesite is still maintained every year.

Zion Lutheran Church is located about a mile east of downtown Cleveland along Prospect Avenue.  It is open year round, with the famous Christmas tree displayed annually during the holiday season.  As of this writing no specific visitor or Christmas tree information was available.  There is no cost of admission for either location.  Web: http://www.zioncleveland.com/ (official website).

For those visiting Cleveland’s famous Christmas trees and are still in the Christmas spirit, there is also the Christmas Story House, the restored house where the famous holiday movie was filmed.