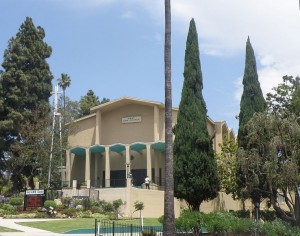 Though not traditionally thought of as a Bible Belt state, the sheer size of California and its sprawling cities has encouraged the development of Megachurches, especially in and around the Los Angeles area.  Los Angeles boasts almost as many major megachurches as Houston and Atlanta, and some of the best known of these are traditional African American denominations.  Some standouts include The West Angeles Cathedral, the largest Church of God in Christ congregation in the United States, and the First African Methodist Episcopal Church.

Many of the traditionally African denomination Protestant churches traces their roots back to the 19th century, some as far back as the colonial era.  The first major church established to serve African American congregants was the African Methodist Episcopal Church.  The AME was also among the first Protestant churches to expand across the country to the West Coast.  In 1872 the AME established the first church founded by African Americans in Los Angeles.

The First African Methodist Episcopal Church was founded by Bridget Mason.  Born a slave in Georgia, she was bought by Mormons and taken to California.  There she escaped and became a freewoman, ultimately becoming a prominent member of the community.  The church she founded remained a small but historic institution for the next century.  However, under new dynamic leadership beginning in the 1970s, the church grew from a small congregation into one of the largest and most famous churches in Los Angeles, honored by president George Bush Sr. as one of his Points of Light.

The Church of God in Christ, the largest predominantly African American denomination in the United States, was founded in 1897 by disaffected Baptists in the American South.  Although due in part to political-religious issues of the Segregated South, the primary driving force was the embracing of the Holiness Movement which encouraged members to live free of voluntary sin.

Launched in the American South, the movement gained traction about a decade later in Los Angeles.  In 1943, one Clarence E. Church founded the West Angeles Church of God in Christ.  For years a small, obscure church, it received new, dynamic leadership in 1969 when Charles Blake became the pastor.  Under his direction the congregation grew from less than one hundred members into the largest traditional African American Church in the United States.

The First African Methodist Episcopal Church is the largest AME church in the United States.  Almost one hundred years to the day after the original church was founded, the original church building burned to the ground.  The current church dates from 1968 and is one of the major religious landmarks of Los Angeles.  First African is one of the most prominent and active churches in Los Angeles and currently serves in excess of 10,000 congregants weekly.

First African Methodist Episcopal Church is located in the densely built-out sprawl of West Los Angeles approximately four miles from the city center.  The West Angeles Church of God in Christ is nearby approximately five miles west of the city center.  As of this writing no visitor information was available.  Web: http://famechurch.org (official website of First African Methodist), http://westa.org (official website of West Angeles Church).