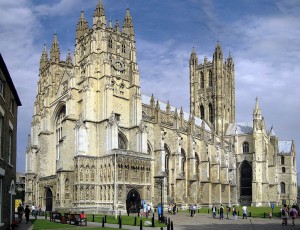 Canterbury Cathedral is the headquarters of the Anglican Church and for most of the Middle Ages it was also England’s greatest pilgrimage shrine.  Interestingly, Canterbury is neither England’s first Christian city (Glastonbury), nor is its Cathedral the most impressive (Winchester Cathedral, Salisbury Cathedral) or famous (Westminster Abbey, St. Paul’s Cathedral).  However, it houses some of England’s oldest Christian treasures, including the relic of St. Thomas Becket, a 12th century activist for the separation of church and state.  While the hordes of Chaucer emulating pilgrims to Canterbury are long gone, many tourists still visit every year to pay homage to this most beloved of English religious sites.  Canterbury Cathedral is a UNESCO World Heritage Site.

The City of Canterbury and its great cathedral enjoys one of the longest and greatest traditions of pilgrimage in Northern Europe.  In 597 AD, Augustine of Canterbury, not Hippo, was sent to England by the Church in order to see it through the dark times of the early Saxon occupation.  Basing himself in Kent, he established a new Archbishopric in Canterbury with himself as the first Archbishop.  A local church was made available for his use, and he soon began the work of converting it into a cathedral.  The construction would take centuries, during which time the site was looked after by the Greyfriars, the first monastic community in England.

Canterbury Cathedral’s great moment in history took place in the late 12th century, when it was the battleground for one of the world’s great showdowns in the separation of church and state.  Henry II, in an effort to reduce the influence of Rome, had his close friend Thomas Becket appointed as the Archbishop.  To his surprise, Becket decided to break with the king and insist on an independently functioning church.  This enraged Henry, and Thomas Becket was subsequently assassinated by four of Henry’s knights.  Becket’s martyrdom made him an instant hero to England’s masses, and his tomb at Canterbury Cathedral was soon swarming with pilgrims.  To reconcile with the Papacy, the English monarchy rushed to formalize Thomas Becket’s canonization.

Becket would go on to become one of England’s most popular saints.  For centuries afterwards Canterbury Cathedral was England’s most important religious center.  The great annual pilgrimages that descended on the cathedral became the subject of Geoffrey Chaucer’s famous 14th century book The Canterbury Tales.  The cathedral made yet another rendezvous with history in the 16th century during the reign of Henry VIII.  Henry, inspired by the Reformation sweeping through Central Europe, openly declared the English Church independent of Rome after severe disagreements with the Papacy over his marital affairs,.  Although many of Catholicism’s traditions were maintained, authority was vested in the Archbishop of Canterbury, who answered to the monarchy.  Virtually overnight, Canterbury suddenly found itself the center of one of the world’s largest Christian denominations.

The tradition of Canterbury being a center of Christian authority in England, both in the Catholic and Anglican periods, has existed for fourteen centuries.  The current Archbishop is still considered a successor of Augustine, of which there have now been over a hundred.  After the Pope in Rome and the Patriarch in Constantinople, the Archbishop of Canterbury heads the third largest united Christian denomination in the world.  Today Canterbury Cathedral is one of England’s most sacred, if not most visited, Christian holy sites.

Canterbury is one of Europe’s great cathedral cities, and though much of it was rebuilt after the World War II, its tower walls, narrow streets and half-timber houses and shops still appear much today as they did in the Middle Ages.  The early church that Augustine inherited and expanded is now gone.  The current structure was founded in the 11th century and was largely completed in 1077 AD.  The overall design features atypical cross-shaped layout.  However, what is effectively a second transept makes it look similar to the French Cross of Lorraine.  Its lofty design and intricately detailed exterior masonry suggest something other than Gothic.  A large monastic compound and cloister is adjacent to the cathedral.

Canterbury Cathderal’s interior is typical of 11th century architecture, with high vaulted ceilings supported by great pillars.  However, its light colored walls, extensive lighting and numerous windows give it a much lighter and airier feel then typical of the period.  The main site of interest, of course, is the Tomb of Thomas Becket.  A number of memorials around the church mark places of importance.  An ancient marble plaque identifies the location where the saint was murdered.  Another plaque marks the spot where Pope John Paul II knelt in prayer with the Archbishop of Canterbury.  Thomas Becket’s body lies under a simple stone slab that is merely labeled ‘Thomas’ in large red letters.

Canterbury Cathedral lies on the outskirts of the Old Town of Canterbury, approximately fifty miles east of London.  It is open in Winter from 9:00am-5:00pm and Summer from 9:00am-5:30pm (Sundays year-round 12:30pm-2:30pm only).  The cost of admission is L7.50.  Web: www.canterbury-cathedral.org (official website)

For centuries Canterbury was England’s defacto pilgrimage city, and many buildings in the city were associated with the cathedral.  Two major sites of religious importance are the ruins of St. Augustine’s Abbey, which was founded by the famous missionary, and St. Martin’s Church, the oldest parish church in England.  The Friary of the Greyfriar’s dates back to the 13th century and is one of the few surviving monasteries of Henry VIII’s purges.