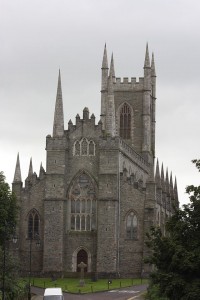 The tradition of the missionary Patrick in Ireland represents one of the greatest relationships between any nation or people and their patron saint.  Patrick is as beloved in Ireland as virtually any other saint is anywhere else in the world.  His feast day is among the most celebrated in the world.  After his monastic training, Patrick was primarily active as a missionary in Ireland’s Northern provinces, especially around Armagh.  Ironically, after the division of Ireland, most of the sites associated with this champion of Catholicism were left in Protestant English territory.  Nevertheless, Downpatrick still draws pilgrims from all over the British Isles, and is one of Ireland’s top Christian holy sites.

It is strange to think that Ireland’s most famous saint and evangelist was not actually Irish.  Born in the late 4th century in Western England, Patrick was kidnapped by Irish raiders at a young age and sold as a slave to an important Druidical leader.  During his time in captivity he developed both a great faith in God as well as a mastery of Celtic languages and customs.  Both served him well in later years.  He escaped slavery at the age of twenty-two, and then spent a dozen years recovering and studying in the Monastery of Auxerre.  After years of theological and evangelistic training, Patrick decided to put his familiarity with the Celts to good use.

Patrick traveled to Ireland as that country’s first truly successful missionary.  He eventually settled at Armagh, where he established a church, monastery and an early missionary seminary.  The main territory of his work was the area around Down County, though he traveled throughout Ireland teaching the Gospel.  By the time of his death, the majority of Ireland had been converted to Christianity.  According to tradition, Patrick died in the year 493 AD, well past his 100th year.  Despite the importance of Armagh in his life and works, the great Irish missionary was for some reason laid to rest in Down, almost fifty miles away.  At some later point the town was renamed Downpatrick in honor of its most famous dead resident.

The date of the first church in Downpatrick is uncertain, but a Cathedral existed on the site at least by the end of the 10th century.  Because of the presence of St. Patrick’s Tomb, Downpatrick became one of Ireland’s most important religious centers within a few years of his death.  In the ensuing centuries, Down Cathedral had a turbulent history. It was repeatedly destroyed by Viking raiders, Norman conquerors, Anglican zealots and earthquakes.  From 1539 through 1789 the Cathedral lay in ruins.  Oddly, it was a visit by the famous Protestant minister John Wesley that seems to have spurred interest in Down Cathedral’s reconstruction and restoration.  Work was completed in 1826, and with only periodic renovations, has been around ever since.

With both Armagh and Downpatrick located in Northern Ireland, the sacred sites of St. Patrick were neglected by Catholic pilgrims and most other visitors for centuries.  Years of violence between the Protestant north and Catholic south only exacerbated the situation.  However, with over a solid decade of peace behind them, mutual religious tolerance seems to be rapidly improving in Northern Ireland.  As a result, interest in religious visits to Down Cathedral is once again on the rise, and Downpatrick is poised to reclaim its title as one of Ireland’s premier Christian pilgrimage destinations.

The current incarnation of Down Cathedral dates back less than two centuries, and is more impressive for its simple beauty and setting amidst Ireland’s rolling green hills than it is for size.  More like an oversized church than a true cathedral, many of its architectural elements hearken back to earlier more romantic styles.  Its most striking feature is the massive square bell tower that juts out in front.  The interior reflects 19th century architectural trends, with white-washed walls and rich wooden fixtures.  The large oak-encased organ which dominates the wall behind the altar also dates back to the cathedral’s rebuilding in the 19th century.

Unlike most such Catholic shrines, the great relic of Downpatrick is actually located outside the cathedral.  The ancient High Cross which stands guard over the site once stood in the marketplace marking the road to the church.  Found in pieces scattered throughout Down, it was reassembled and erected just outside of the cathedral in 1897.  The high point of the church grounds is the Tomb of St. Patrick, marked by a tremendous granite boulder.  The tradition of the tomb dates back to the 7th century, and later legends add that St. Brigid and St. Colmcille are also buried at the site.  The boulder marker is only about a century old, placed here to identify the site and protect it from souvenir seakers.

Down Cathedral is located on the outskirts of the town about twenty miles south of Belfast.  It can be easily reached on foot from the town center.  The Tomb of St. Patrick is an open site.  The cathedral is open Mondays through Saturdays from 9:30am-4:30pm, and Sundays from 2:00pm-5:00pm.  There is no cost for admission.  Web: www.downcathedral.org (official website)

Many of the sites associated with St. Patrick and ancient Christianity in Ireland are long gone, but a few still remain.  The ruins of St. Tassach’s Church are among the oldest in Ireland, and it was here that St. Tassach likely administered last rites to St. Patrick as he neared death.  There are also ruins of the ancient Cistercian Inch Abbey in sight of the cathedral.  A few miles away is Saul’s Church, designed to be a replica of the original church established by St. Patrick in the 5th century.