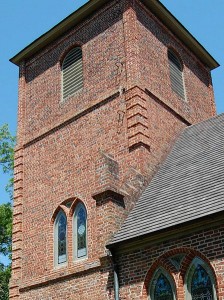 St. Luke’s Church in Smithfield, Virginia is generally recognized as the oldest Protestant church in the United States and, by extension, the New World.  Erected in the early- to mid-1600s, it outlasted the handful of churches that preceeded it in the first English colonies of Massachusetts and Virginia.  Only the San Miguel Mission in New Mexico is believed to be older.  Smithfield shares its early colonial history with nearby Jamestown and Williamsburg, both of which boast very old churches as well.  Despite that, Smithfield is a bit off the beaten tourist track, and its famous church receives fewer pilgrims than it should.  Still, many thousands find their way to St. Luke’s Church every year, and its popularity as a tourist destination is on the rise.

In the wake of the successful founding of the Jamestown Colony in Virginia in 1607, settlements of English colonists began springing up all along the Virginia coastline.  One of the earliest to be located outside of the ‘Colonial Triangle’ of Jamestown-Yorktown-Williamsburg was Smithfield.  Smithfield, not too far from Jamestown, was first settled in the 1630s.  And, as usual, one of the first public buildings to be erected in the town was a church. 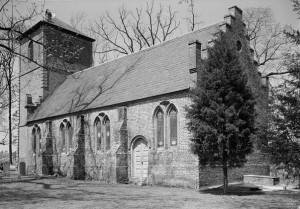 Benns Church, as St. Luke’s was originally known, was probably constructed in 1632.  It was one of the earliest brick structures built in the English colonies and would go on to outlive any of its predecessors.  The church spent the bulk of the Colonial and post-Colonial periods quietly catering to its congregation.  Other than its great antiquity, virtually nothing exciting or of historical import occurred at the site in its first few centuries.

That isn’t to say that St. Luke’s doesn’t have its interesting stories.  During the early Colonial era, the church was one of the few places where the General Court of Virginia could meet.  According to legend, several important Founding Fathers, including George Washington, stopped to pray here during the American Revolution.  Another legend recounts how the church records were raided during the War of 1812 for use as musket-wadding by desperate American soldiers. 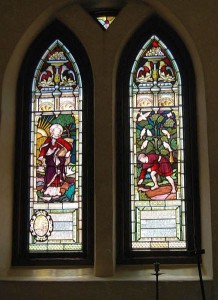 Unfortunately, there is a measure of controversy concerning the actual age of St. Luke’s Church.  By some estimates the style and quality of the church is simply too good for having been completed at such an early date.  Moreover, the dating on the bricks may be read as 1682 rather than 1632.  While architectural experts seem to lean towards the latter year, traditionalists stubbornly cling to the earlier date.  A compromise suggests that the original church was built in the 1630s, and was either rebuilt or considerably renovated in the 1680s.  Either way, St. Luke’s being America’s oldest extent English Colonial Church remains a strong local tradition.

St. Luke’s Church is not only America’s oldest surviving colonial church, it is also America’s oldest Gothic-brick structure.  The bulk of the church dates from the 17th century, though the roof has been replaced more than once.  The most noteworthy feature of the church exterior is its simple red-brick walls, which, though such architecture would become the hallmark of many early American churches, was then virtually unknown in Europe.  The dominent exterior feature of the church is its sixty-foot bell tower, at one time one of the tallest structures in the American colonies.

The interior of the church features extensive woodwork, much of which are reproductions of the originals which date from the 18th and 19th centuries.  A wooden screen separates the congregation from the pulpit, a setup which is very rare in American Protestant churches, even during the early years.  The stained-glass windows are anachronistic and date from a much later period, though even the original lead-glass windows were an extreme rarity in the 17th century.

St. Luke’s Church is located on the outskirts of downtown Smithfield, just outside of Newport News and about sixty miles southeast of Richmond.  The church is open April through October from 9:30am-5:00pm and November, December, February and March from 9:30am-4:00pm (closed on Sunday mornings and Mondays year-round).  There is no charge for admission.  Web: http://www.historicstlukes.org/ (official website)

Smithfield is close to Virginia’s Colonial Triangle, which contains some of America’s oldest settlements, buildings and churches.  Among these is the Bruton Parish Church in Williamsburg, and Grace Episcopal Church in Yorktown, both of which have roots almost as old as St. Luke’s.