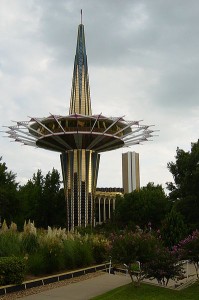 Central Oklahoma has always been an integral part of the Bible belt since pioneer days, and it is home to several the quintessential Bible Belt cities.  One of these is Tulsa, home of the Oral Roberts ministry and the Oral Roberts University; and another is Edmond, the home of Life Covenant Church, which currently holds the recored as the largest church in the United States in terms of congregants.  Between these they offer two of the most unique Christian sites in America: ORU’s famous prayer tower, and the original LifeChurch sanctuary and broadcasting studio.

Oral Roberts was born in 1918 to a highly religious family.  His father was a reverend, and Roberts himself pursued religious studies in college.  During the war years, he began his career as a pastor and made a name for himself as a faith healer.  In the postwar years Roberts became one of the most popular, if highly controversial, revivalists and televangelists in the United States. 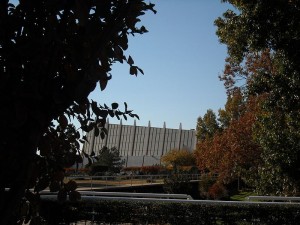 Through the Oral Roberts Evangeltic Association, his church raised large sums through his seed-faith programs.  Though highly controversial, this fundraising did contribute to the founding of the state-of-the-art, if short-lived, City of Faith Medical and Research Center, and the enduring Oral Roberts University.  Roberts died in 2009, ending well over half a century of one of the most famous ministries in American history.  Though his legacy is riddled with controversy, there is no doubt of its lasting impact on the modern-day Bible belt.

Roberts left a strong evangelistic spirit in Oklahoma after his death, and many others have since picked up the torch.  One of the best known of these is Craig Groeschel, the founder of Life Covenant Church, currently the largest church in the America.  A former Methodist pastor in Oklahoma City, Groeschel founded LifeChurch in 1996 in the wake of the Oklahoma City bombing.

LifeChurch, one of the fastest growing churches in modern history, became famous for reaching non-churchgoers by using new methods and ideas, and was a pioneer in internet outreach.  It was twice named America’s most innovative church.  Technically a multi-church, it currently has fifteen church buildings, with the main campus in Edmond, and over sixty thousand congregants.  The Life Covenant Church, officially known as LifeChurch.tv, is world famous for its internet ministry.

The sites most closely associated with the Oral Roberts ministry are located on the campus of Oral Roberts University.  The first is Christ’s Chapel, one of the most futuristic examples of church architecture in the United States.  Its immense sanctuary often features famous guest speakers and sermons are broadcast bi-weekly.  Even more famous is the campur Prayer Tower, an absolutely unique two-hundred foot tall structure at the center of the campus.  From any horizontal direction it bears the shapeness of a Cross, and from above a giant Star of David.

The main campus of the Life Covenant Church is a large but not overtly so considering the number of congregants.  The main point of interest here is the massive sanctuary-studio where large numbers of people can gather to see live one of the most watched evangelists in America’s largest church.

The sprawling campus of Oral Roberts University is located approximately six miles south of downtown Tulsa.  The soaring Prayer Tower is located at the dead center of the campus and serves as a visual focal point, with Christ’s Chapel nearby.  Life Covenant Church is located in the suburb of Edmond approximately twelve miles north of Oklahoma City.  As of this writing no visitor information was available for either site.  Web: www.oru.edu (official website of Oral Roberts University); www.lifechurch.tv (official website of Life Covenant Church).

For those who can’t enough Oral Roberts, the Oral Roberts Evangelistic Association headquarters is also located in Tulsa, about ten miles away from the university.