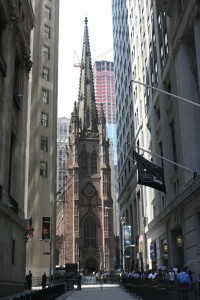 If there is such a thing as a church capital of the United States, then New York City would undoubtedly be the leading contender for the title.  No other city in America, if not the entire Western Hemisphere, boasts such an amazing collection of churches from across the spectrum of Christian denominations (not to mention synagogues).  Of these, there are two outstanding buildings which represent the heart of the American Episcopal Church.  The first is Trinity Church, one of the oldest and most prominent churches in America, famous for its long role in American history and its impressive graveyard.  The second is the Cathedral of St. John the Divine, the largest non-Catholic church in the world, as well as the largest church of any denomination in the United States, the second largest in the Western Hemisphere, and the fourth largest in the world.  Together these are among New York City’s most popular religious sites, and a must-see for Episcopal and Anglican pilgrims to the Big Apple. 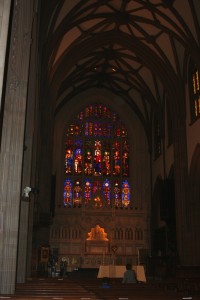 Formal separation took place in 1789, when an arrangement was made in which the Episcopal Church would remain in communion with the Anglican Church without having to swear and oath of loyalty to the British monarch.  This arrangement has remained in place ever since.  After the separation, many of the Anglican bishops in America were removed and replaced with non-Loyalist clergymen.  Samuel Provoost became the first presiding bishop of the Diocese, and New York would later become the headquarters of the Episcopal Church in America.  In the meantime, Trinity Church retained its position of prominence throughout much of the 19th century, although it was replaced by a new and grander building in 1846 after being badly damaged by snowfall and winter weather.

As the 19th century drew to a close, New York had grown into one of the world’s largest and most populous cities.  The Episcopal Diocese of New York reached its peak around this time in terms of parishioners, and it was decided a new cathedral was needed.  Moreover, the huge influx of immigrants from Europe led to a staggering growth of other religious groups in the city, notably Catholics and Jews.  Therefore the diocese embarked on the single most ambitious Protestant construction project in history: a cathedral on a scale so massive that it would not only be befitting of the New York skyline but also architecturally dominate the host of new religious buildings then under construction throughout the city. 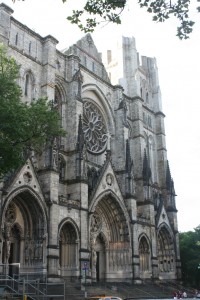 Building began in 1892, and it took seven years just to complete the crypt, where the inaugural service was held in 1899.  It would take four decades more for the bulk of the cathedral to be built.  It did not open until 1941.  No Protestant church in America had ever taken so long to complete, though many Catholic cathedrals around the world had taken far longer.  Nevertheless work on St. John’s was not yet done.  Building would continue until 1997, but even when the last of the scaffolding was taken down in 2007, work was still incomplete.  Today St. John’s is the seat of the bishop of the Episcopal Diocese of New York, and is one of the world’s most important churches in the Anglican Communion.  It is also one of the most popular churches for visitors to New York, and one of America’s great Christian architectural achievements.

Trinity Church is one of America’s most historic churches.  Once the tallest building in New York City, it is now dwarfed by the immense skyscrapers of the Financial District.  It nevertheless manages to stand out, in part due to its conspicuous location at the corner of Wall Street and Broadway, as well due to its out-of-place graveyard.  The current brown-brick church building was completed in 1846, and is one of America’s best examples of Gothic Revival architecture.  The church is reknowned for its cemetery, which boasts the gravesites of a number of prominent early Americans, including Alexander Hamilton. 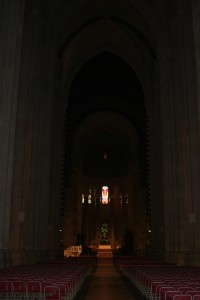 The Cathedral of St. John the Divine was for many years America’s longest ongoing construction project.  Begun in 1892, the cathedral is jokingly referred to as St. John the Unfinished (it was still technically incomplete when the last scaffolding came down in 2007).  It is considered the greatest neo-Gothic cathedral in America.  The cathedral grounds sprawl over three city blocks and has one of the largest architectural footprints in the city.  The immense belltower on the southern side of the western façade is still under construction.  The interior of the cathedral measures in at a jaw-dropping six hundred feet in length and a hundred and twenty-four feet in height.  The major feature of the cathedral’s interior is the high altar and the tomb of Horatio Potter, the bishop who inaugurated the building.  St. John’s is famous for a septet of chapels knkown as the Chapels of the Tongues which represent the major immigrant groups who arrived at Ellis Island at the turn of the century.

Trinity Church is located at the southern end of Manhattan, in the middle of the Financial District and close a number of colonial-era sites as well as the ferry-loading area for the Statue of Liberty.  It is open weekdays from 7:00am-6:00pm; Saturdays from 8:00am-4:00pm; and Sundays from 7:00am-4:00pm.  The Cathedral of St. John the Divine is located at the northern end of Manhattan, a bit of a distance away from New York City’s traditional tourist venues.  It is open Mondays through Saturdays from 7:00am-6:00pm, and Sundays from 7:00am-7:00pm.  There is no cost of admission for either location.  Web: http://www.trinitywallstreet.org/ (official website of Trinity Church; http://www.stjohndivine.org/ (official website of St. John the Divine) 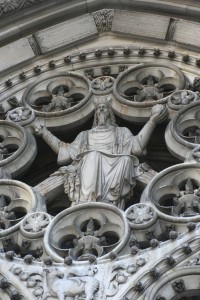 When it comes to setting religious architectural records in the United States, New York City is the reigning champion.  In addition to the Cathedral of St. John the Divine, the largest church in America, New York is also home Riverside Church and St. Patrick’s Cathedral, the first and second tallest churches in America, respectively.  New York also boasts some of America’s most prominent religious education institutions, including the General Theological Seminary.