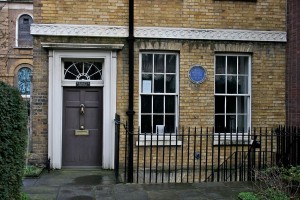 Since the days of King Henry VIII, England has been on the cutting edge of Christian theological development.  From the Anglicans in the 16th century, to the Puritans in the 17th century, to the Methodists in the 18th century, to the missionary societies of the 19th century, some of the greatest modern-day Protestant organizations and institutions can be traced back to post-Reformation England.  The vast expansion of the British Empire in the 1700s and 1800s helped to increase the profiles of these organizations around the world.  Today London boasts one of the largest and most diverse collections of Protestant heritage sites of any city in the world.  Among these are the tombs of two of the most prominent of post-reformation Protestant figures: John Wesley, the founder of the Methodist Church; and William Booth, the founder of the Salvation Army.

England has been a Protestant nation ever since Henry VIII’s break with the Catholic Church in the 1530s.  However, it would not be until the 18th century when the Enlightenment would make England’s authorities more amenable to new denominations independent of the crown.  In 1725, John Wesley, a graduate of Christ College at Oxford and an ordained Anglican deacon, began to have ideas of reforming the Anglican Church, which was at that time little more than a schismatic branch of Catholicism.  Over the next few years he began to organize his ideas into the concept of Methodism, which downplayed the importance of church ceremony in favor of a variety of ideas borrowed from Luther and Calvin.  However, like Luther, it was apparently not his intention to break from the mainstream church of his day.

Wesley undertook an energetic ministry that was famous for its impassioned sermons.  He preached in London for a time, and then in Georgia in the American colonies at the request of the Governor.  Eventually, his style and ideas aroused the ire of the Church of England, and he found himself somewhat ostracized.  By 1739, he had all but broken with the Anglicans, and despite occasional harrasment, Wesley persevered.  By the time of his death in 1791, Methodism was solidly established, both in England and in the Americas.  The Methodists are now among the most popular and progressive of Protestant denominations.

The success of the Methodist movement, which had a heavy focus on providing care for the needy, prompted the formation of yet more Christian organizations.  In the 19th century, England saw a proliferation of missionary societies, some of which were formed to advance Christianity in the English imperial possessions around the globe, others who sought to alleviate the crushing poverty created by the Industrial Revolution.  By far the most famous of the latter was the Salvation Army.  William Booth was a self-taught Methodist lay-minister who grew up amidst the poverty and squalor of London’s East End.  However, he was not satisfied with the work of a minister, and increasingly devoted most of his time caring for the needy and working in the city’s soup kitchens.

In 1865, William Booth and his wife Catherine founded The Christian Revival Society, where they worked diligently to minister to the city’s outcasts and criminal element.  By 1878, the Society had grown substantially.  In order to better expand their activities it was reorganized along quasi-military lines and renamed the Salvation Army.  Booth spent the next thirty-four years of his life expanding the Salvation Army, first throughout England, then into Continental Europe and America, and finally around the world.  During his lifetime, William Booth saw the organization expand into fifty-eight nations and colonial territories.  By the time of his death he was one of the most famous and honored Christians in the world.  Today the Salvation Army remains the prototype charitable institution against which all other Christian missionary organizations are measured.

Most of London’s early Methodist sites revolve around Wesley Chapel.  This church, dating from the 18th century, is a beautiful example of early Protestant architecture.  John Wesley preached in this elegant church during his ministry.  The house where he lived is nearby, and his tomb is located in the church graveyard.  The house and portions of the church are now home to exhibits on Wesley and Methodism.  His wife is buried across the street at Bunhill Fields.  Other Wesley sites scattered about London include the Methodist Church House and the John Wesley Conversion Place Memorial on Aldersgate Street

The Abney Park Cemetery began life as a park and arboretum.  During the 1880s this magnificent Victorian landscape was transformed for use as a cemetery.  At the time of William Booth’s death, his family and the Salvation Army acquired a plot close to Church Street.  He was buried there in one of the largest public funerals in London’s history.  He was followed later by his wife, son and other important early members of the Salvation Army.  A sandstone plaque marks the site of Booth’s grave.  Among the other major Salvation Army Sites in London are the world headquarters, the territorial headquarters on Newington Causeway, and the William Booth Memorial Training Center on Denmark Hill.

Wesley Chapel and its cemetery are located in the northern part of the City proper, not too far from St. Paul’s Cathedral.  They are open Mondays through Saturdays from 10:00am-4:00pm, and Sundays 12:30pm-1:45pm.  The Abney Park Cemeter is further to the northeast in Stoke Newington.  As of this writing visiting hours were not available.  Both cemeteries are free.  Web: www.wesleyschapel.org.uk (official website), www.abney-park.org.uk (official website)

London enjoys one of the greatest collections of churches and Protestant sites of interest in the world.  First and foremost is Westminster Abbey, burial ground of almost every English monarch, as well as a host of famous aristocrats, writers, scientists, artists and clergymen.  Christopher Wren, the famous 17th century architect, oversaw the rebuilding of many of London’s churches after the great fire.  His greatest achievement is St. Paul’s Cathedral, with the second largest dome in Europe.  The Church of St. Martin-In-The-Fields is supported by the monarchs as an open-door church, and is home to one of the world’s most famous choirs.