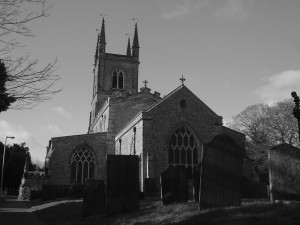 If Wittenberg in Germany is the place where the Protestant Reformation was born, than the small town of Lutterworth in Central England was the place where it was conceived.  It was here in the mid-14th century that the theologian John Wycliffe offered the first serious challenge to the authority of the Catholic Church, which many in Europe saw as having grown increasingly corrupt since the early days of the Crusades.  Wycliffe also worked here while translating the Bible into English, something that had not yet been done.  St. Mary’s Church in Lutterworth is part of John Wycliffe’s legacy, for he preached here and was later buried here.  Although Lutterworth is nearly lost in the shadows of Wittenberg, Prague, Geneva and other places related to the Protestant Reformation, it nevertheless retains its quiet importance in the history of England and Christianity in general.

John Wycliffe was born into a large and prosperous family sometime around the year 1325.  Little is known of his early life, other than the fact that he was enrolled at Oxford around the time he turned twenty.  He was apparently a keen student with diverse interests, choosing to study theology and philosophy with an eye towards a career in the Church.  He spent the better part of a quarter of a century studying and teaching at Oxford, becoming one of the most renowned scholars of his day.  However, though he taught theology and preached in churches nearby, Wycliffe became increasingly disillusioned with the Church, which he saw as having grown stagnant and corrupt.

Beginning in 1366, John Wycliffe became involved in a series of events that ultimately led to his personal break with the Church.  It began when he was replaced as the head of Canterbury Hall at Oxford by a monk who had better political connections to the Archbishop of Canterbury.  It worsened over the next decade, during which time he began to quietly preach anti-Catholic ideals, including the rejection of the Papacy as the inherently supreme authority of all Christians.  Despite his beliefs he received an appointment to the Church in Lutterworth in 1374.  Two years later, standing on the Lutterworth pulpit, he began to make his teachings more vocal, and the Church began to take notice.

In 1377 the conflict between John Wycliffe and the Catholic Church began in earnest when the Pope issued a Bull condemning Wycliffe’s teachings.  For the next seven years he would launch an ever-increasing stream of verbal attacks against the corruption of the Church bureacracy.  Protected by John of Gaunt and other important officials in England, the Church could do little in retaliation but issue condemnations.  Throughout this period he also worked diligently in translating the Bible into English, a task that he deemed necessary as he believed that the only true authority in Christianity was the Holy Scriptures.

In the final years of his life he gained a large following known as the Lollards, the first true Protestant movement in Europe.  By the time of his death in 1384 he had won over many English Christians to his ideas and earned the wrath of the Papacy.  Strangely, he was never excommunicated.  However, in an effort to discourage other proto-Protestants in the decades after his death, Wycliffe was formally declared a heretic in 1415.  His body was removed from the St. Mary’s Church burial ground, cremated, and his ashes scattered in a nearby river.  His books were similarly ordered destroyed.  Nevertheless his ideals lived on among the Lollards in England, and later in the Hussite movement of Central Europe.  They would ultimately bear fruit in the outbreak of the Protestant Reformation two centuries later.

The Church of St. Mary of Lutterworth dates back to the 13th century and was constructed on the site of an earlier church.  It is still in use as the town’s parish church.  Set amidst rolling hills and thick green copses of trees, the stone edifice is the architectural centerpiece of the town.  The church was built in a late-gothic style that was popular in England at the time, and is dominated by a tall square belltower crowned with four small spires.  The tower was rebuilt in the 18th century after being damaged during a storm.

The interior of the church is simple with a very traditional feel.  The highlight of the church is a series of medieval-era wall paintings that were uncovered during a restoration in the 19th century.  Among these is a picture of the Final Judgement.  There are also paintings of King Richard II and his wife, as well as a picture of John of Gaunt.  An old cemetery can be found behind the church, with gravestones dating back to the 17th century.  It is believed that John Wycliffe was once buried in this graveyard, but his body is long gone and it is uncertain exactly where the site of his grave once was (or even if it was ever at the church at all).

The Church of St. Mary is located on the edge of the main town of Lutterworth, approximately twenty-five miles east of Birmingham and seventy miles northwest of London.  The church is easily accessible from the town center.  As of this writing, no visitor information was available for the church.  Web: www.stmaryslutterworth.org (official website)

John Wycliffe spent most of his life at Oxford and Lutterworth, and the few sites associated with his life are located in those two cities.  Canterbury Hall, the college at Oxford where John Wycliffe taught, is now Christ Church College, one of the largest and most prestigious at the university.