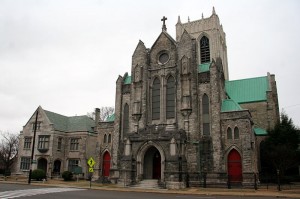 St. Mary’s Episcopal Cathedral is perhaps the most historic Episcopal Church founded after the American Revolution.  The first full-fledged, traditional Episcopal Cathedral in the South, it is famous for two important events in its history.  The first was an epidemic of Yellow Fever which struck in 1878, in which priests and nuns from several Memphis churches were martyred when they stayed behind at St. Mary’s in an effort to help the sick and dying; the other was the assassination of Martin Luther King Jr, after which St. Mary’s leaders led the protest to the Memphis city hall in a show of solidarity.

The American Episcopal Church began to spread into the American interior in the early 19th century, and was formally established in Tennessee in 1829.  The Memphis diocese was founded a few years later.  The original church, Calvary Episcopal Church, was soon too small to accommodate the growing congregation, and a new church, St. Mary’s, was founded as a mission church in North Memphis in 1857. 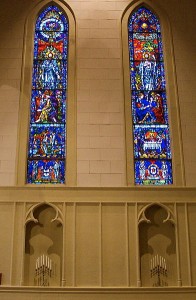 Within a decade, this congregation had also grown significantly, and it was decided that a larger church was needed.  At the time, the idea of Anglican high church was becoming popular in America, so the new church was designed as a traditional Episcopal Cathedral, the first in the south.  It was completed in the 1870s, just in time for one of the worst disasters in the history of Tennessee.

In 1878, an epidemic of yellow fever struck Memphis, killing over five thousand citizens.  During the ordeal, several nuns from St. Mary’s School for Girls as well as clergymen from St. Mary’s and other local churches gathered at the cathedral and used it as a base to treat the sick when many of the city’s doctors had fled.  While caring for countless citizens, four of the nuns, including their head sister Constance, and two priests succumbed to the disease.  These six are honored in the Anglican Communion as the martyrs Constance and Her Companions. 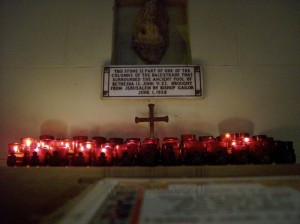 Almost a century later, Memphis was the site of the assassination of Martin Luther King Jr., who was in town to help negotiate a labor standoff.  The next day, leaders from Memphis’ religious community met at St. Mary’s in a show of solidarity for King.  William Dimmick, the Dean of the Cathedral, led a march on the town hall to take up King’s cause.  Martin Luther King Jr. was subsequently honored in the Anglican Communion.

St. Mary’s Episcopal Cathedral was rebuilt in 1926, and the church as it now stands dates fom that time.  The Gothic Revival structure consists of several buildings, including the main cathedral, the diocese house and the Sister’s Chapel.  The latter building is the oldest part of the complex and dates from 1888. 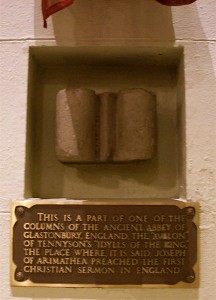 The main cathedral itself is one of the most beautiful churches in Memphis, and it features some interesting treasures.  One is a piece of stone from a column at Glastonbury Abbey, a ruined church on the site where it is believed that Christianity was introduced to England.  Another is a piece of stone from a column that once surrounded the Pool of Bethesda in Jerusalem, donated to the church in 1928.  The high altar of the cathedral is dedicated to Sister Constance and Her Companions.

St. Mary’s Episcopal Cathedral is located on the east side of downtown Memphis.  It is open Mondays through Fridays from 8:30am-4:30pm and Sundays during the 8am and 11am services.  There is no cost of admission.  Web: www.stmarysmemphis.org (official website).

The original Episcopal church in Memphis, the Calvary Episcopal Church, dates from 1844 and is the oldest building in continuous use in the city.