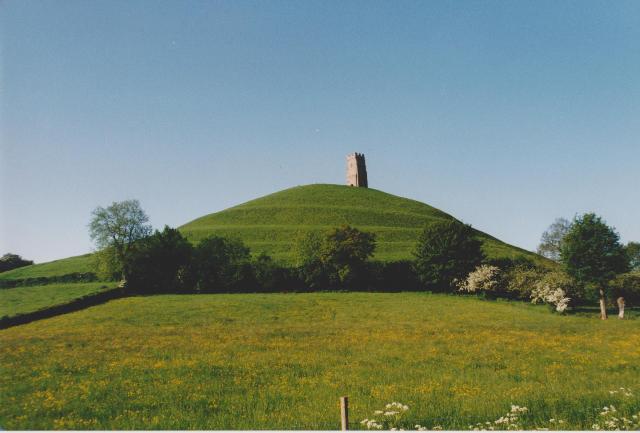 When it comes to locations for the Holy Grail, at least in popular tradition, no place beats Southwestern England.  According to legend, the Grail was taken by Joseph of Aramathea after the Crucifixion.  Afterwards, he fled Judea to save his life, winding up in England, where he supposedly had connections with the tin miners there.  The Grail went with him, and subsequently became caught up in the Arthur legend.

Centuries later, in the chaos of the collapse of the Roman Empire in the West, a man named Arthur rallied the Britons and established, at least for a short while, a new kingdom in Britannia.  As part of this task, his knights sought and found the Holy Grail.  It ultimately wound up buried at the foot of the odd looking Salisbury Tor, where it remains to this day.  A spring at the base of the hill is said to flow from, or at least past, the buried Grail.

I don’t think there is any way to get through this topic without at least one mention of the elephant in the room: Dan Brown’s famous novel (and subsequent film), The DaVinci Code.  According to this story, which is in fact based on an earlier legend, the Holy Grail was brought from Judea to Italy by Templar Knights, and thence to an undisclosed location.  Speculation on where this undisclosed location is has been rampant over the centuries, ranging as far away as Oak Island in Nova Scotia, Canada.

According to Brown’s version of the story, the Grail ultimately wound up in Scotland, hidden beneath Rosslyn Chapel.  Rosslyn Chapel seems an interesting candidate as it was both 1) among the last surviving Templar churches, and 2) is really weird and creepy.  Supporters claim the Grail is hidden either in a column known as the Apprentice Pillar or in the family crypt.

In later years, many Christian artifacts made their way from or through Italy to other points in Europe.  One of the most popular destinations was Spain, both due to its accessibility to Italy by sea and, in later years, its importance as one of the bastions of the Roman Catholic as a bulwark against the Protestant Reformation.  Some of the strongest traditions of the Holy Grail are tied to Spain.

There are at least three major claimants to the Holy Grail in the Iberian Peninsula.  The lesser two are St. Mary de Montserrat in Catalonia; and the Basilica of St. Isadore in Leon.  However, the top contender is that kept at the Cathedral of St. Mary in Valencia.  A cup kept there has been traced back to the Middle East and dated to the Roman era.  Although there is no way to know for sure, it is recognized by the Roman Catholic Church as its official Chalice.