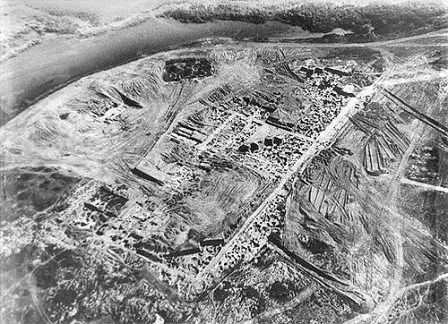 When it comes to places of historic Jewish interest, it is Israel, Europe and the United States that most readily come to mind.  Some might also consider the many other places of Jewish interest that can be found scattered throughout the Middle East.  But not many would immediately think of Central Asia or the Far East.  Nevertheless, the Diaspora spread as far as India and China as early as the Middle Ages, and treasures of Judaism may be found in places between the Black Sea and the Pacific Ocean.  Some of these are very far off the beaten path, but worth it for those seeking for a fascinating look into the history of Asia’s Jews.

Ruins of Atil, former capital of the Khazar Empire

One of the least remembered and arguably one of the oddest side-stories of Jewish history was the existence of an enormous Jewish state in west-central Asia during the Middle Ages.  The Khazar Empire, whose rulers and aristocrats converted to Judaism sometime in the 8th or 9th centuries, may in fact have been the largest Jewish-ruled realm in history.  It has been theorized that the Ashkenazi Jews were descended in part from Khazars who had migrated westward into Europe around the 10th or 11th centuries, about the same time as Yiddish-speaking Jews were migrating eastward from Germany.  Archaeologists have only very recently rediscovered the archaeological ruins of Atil, the Khazar capital and possibly the greatest Jewish city of the Middle Ages, and research into the site is currently ongoing.

The archaeological dig site at Samosdelka outside of Astrakhan is only a few decades old.  Begun in the 1990s, only a few initial findings have as yet been reported.  There is little else in the way of description available at this time.  However, the ruins of Atil will undoubtedly emerge as one of the most important Jewish archaeological dig sites over the next few decades.  As of this writing, no visitor information was available.

Uzbekistan in Central Asia is home to one of the world’s oldest Jewish communities outside of the Middle East.  While archaeology confirms that the Bukharan Jews have been here since at least the 4th century, tradition suggests that they may have arrived far earlier.  Both the Assyrian and Babylonian Captivities may have resulted in the establishment of a Jewish community here.  However it is more likely that Jewish merchants settled here in the Roman era due to the area’s importance as a trading center along the Silk Road.  While the community once numbered over a hundred thousand, most have emigrated over the last half-century, and now there are only a few thousand left.

The Jewish Quarter of Samarkand is one of several remnants of ancient Jewish communities in Uzbekistan, and probably the one most worth visiting.  Lost in the tangle of streets in the old town center, the quarter can be surprisingly difficult to find.  Those who do can explore the beautiful 19th century Gumbaz Synagogue, where a handful of Jews still worship.  Of perhaps greater historical and cultural interest is the Jewish cemetery, with crowded gravestones dating back centuries.  Many of these are ornamented with engravings of the faces of those who are buried here.