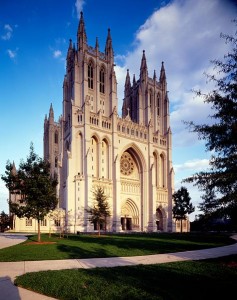 The Washington National Cathedral, also known by its more ponderous, official name, the Cathedral Church of St. Peter and St. Paul in the City and Diocese of Washington, is the defacto national church, at least from an honorary standpoint.  It is one of the largest church buildings in the world, possibly the largest non-Roman Catholic, as well as one of the biggest buildings in Washington DC.  Although it is not a national cathedral in any officially sanctioned sense, it is usually the site of state events that require a church, such as the funeral of a former president.  Many prominent Americans are also buried on the site.  The Washington National Cathedral is attended by politicians, foreign diplomats and other prominent residence of the capital.

The earliest plans for Washington DC included a site for a national church building, but it took over a century after independence for serious planning to get underway.  In 1893, the Episcopal Church, at the time one of the most prominent Christian denominations in the United States, received a commission from the federal government to establish a national cathedral.  Another decade passed during which time plans were drawn up and funds were raised for the project. 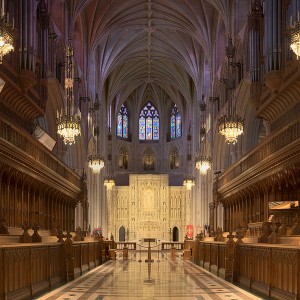 Ground broke in 1907 in a ceremony presided over by Theodore Roosevelt.  After a brief hiatus during World War I, construction was overseen by military hero and leader General John Pershing.  Construction continued on and off for the better part of the 20th century, and was not completed until 1990.

During World War II, the partially completed cathedral was designated by Congress as the National House of Prayer, and many military services were held there.  It has since been the site of many pre-inaugural prayer services, memorial services and funerals.  Three presidential funeral services have been held here, including those of Eisenhower, Reagan and Ford. 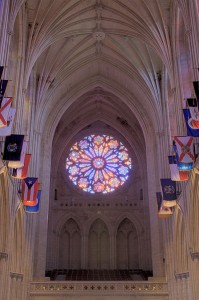 Many prominent Americans are buried on the grounds of the cathedral, including numerous clergymen of the church and prominent politicians of the 1930s and 1940s.  Other famous burials here include president Woodrow Wilson, World War I hero Norman Prince and Helen Keller and her teacher Anne Sullivan.

Washington National Cathedral is one of the largest and most stunning buildings in a city full of large and stunning buildings.  Unlike virtually all of Washington’s other major sites, which are generally Greek or Roman revival in style, the cathedral is modern gothic.  Its white brick façade, replete with two enormous square belltowers and triple entranceway, is strikingly reminiscent of Notre Dame in Paris (other than the bright color).

The cathedral interior is absolutely cavernous, with a forest of immense white columns supporting a soaring ceiling over the nave.  Gothic in style right down to its rose-like stained glass windows and oak choir wing, it’s white brick gives the place a much lighter and airier feel.  The centerpiece of the church, at least from a patriotic standpoint, is the giant but simple marble tomb of 28th president Woodrow Wilson.

The Washington National Cathedral is located on the northeast side of the city, approximately three miles away from the National Mall.  It is open every day year round, though there may be restrictions to entrance during major events.  There is a recommended donation of $10.00 for entrance to the cathedral.  Web: www.nationalcathedral.org (official website).

Washington is packed with major churches, including the national church of almost every Christian denomination.  Probably the most famous Episcopal Church after the national cathedral is St. John’s Episcopal Church, nicknamed the Church of the Presidents.  This church, close to the White House, has been attended by every president since James Madison (they have a reserved pew).