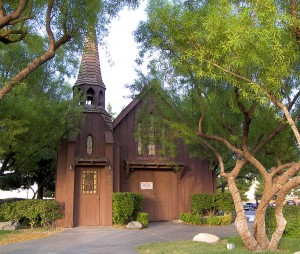 One of America’s strangest religious institutions, for lack of a better term, can be found in one of America’s strangest cities: Las Vegas.  Here, lining the famous Strip and elsewhere throughout the city, can be found dozens of small churches, almost all of which cater exclusively to weddings.  Here, in America’s wedding capital, countless couples tie the knot 24 hours a day.  A tradition stretching back more than seven decades, the wedding chapels of Las Vegas have become something of a national institution.

The Las Vegas Strip, the epicenter of what has become one of the world’s most popular vacation destinations, began humbly in the early 1940s.  The first building on the Strip was not a hotel, but the Wee Kirk O’ the Heather wedding chapel, completed in 1940.  It was soon followed by the opening of the El Rancho Vegas and Hotel Last Frontier.  In 1942, the Last Frontier opened what would become its greatest legacy: The Little Church of the West.  This pretty but small and unassuming chapel went on to spawn Las Vegas’ famous wedding industry. 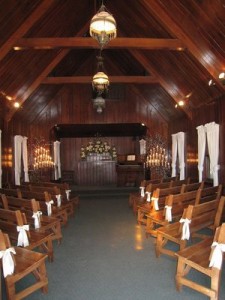 Designed to cater to last-minute weddings, Las Vegas and its chapels served many couples coming to Nevada to elope.  Even in its earliest years, the Strip attracted movie stars and celebrities from nearby Los Angeles, which gave the industry a greater sense of legitimacy and excitement.  The first major celebrity wedding took place in 1943, when movie star Betty Grable married band leader Harry James at the Little Church of the West.

By the 1960s the Vegas wedding industry was booming.  This was especially true MGM released the film Viva Las Vegas starring Elvis Presley, raising the wedding industry’s profile considerably.  Presley indelibly made his mark on Vegas at this time, inspiring the concept of the themed wedding.  To this day Elvis impersonators are a staple of themed weddings, especially at places like the Graceland Wedding Chapel. 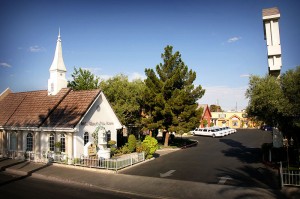 The 1960s and 1970s was a golden age of chapel construction, and some of Las Vegas most famous chapels date from this period.  These range from traditional church venues, such as the Chapel of the Flowers, to the world famous Little White Wedding Chapel, with its drive-thru Tunnel of Love where couples can get married in their cars.  Though cheesy, there is no doubt that the Las Vegas chapels are collectively one of America’s most visited religious sites.

The Little Church of the West, the oldest church still standing on the Las Vegas Strip, is a beautiful old wooden structure designed to look like an American frontier church.  Originally part of the Hotel Last Frontier, it has been moved several times, most recently in 1996.  It stands on one of the nicest landscaped parcels on the Strip and is considered one of the more traditional chapels.  Web: www.littlechurchlv.com (official website). 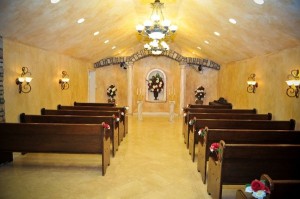 The Chapel of the Flowers, another traditional chapel, was built in the 1960s.  It is considered by many to be the most beautiful, and one of the classiest, of Las Vegas wedding sites, with multiple chapels and a beautiful garden.  It is regularly ranked as one of the best chapels in Las Vegas.  Web: www.littlechapel.com (official website).

A Little White Wedding Chapel is another one of the Strip’s oldest wedding institutions, and it is regularly ranked towards the very top.  Less traditional than some of its contemporaries, it is arguably most famous for its Tunnel of Love, a large, canopied drive-up area where couples can be married without getting out of their automobiles.  It probably boasts more celebrity weddings over the course of its history than any other Las Vegas Chapel.  Web: www.alittlewhitechapel.com (official website). 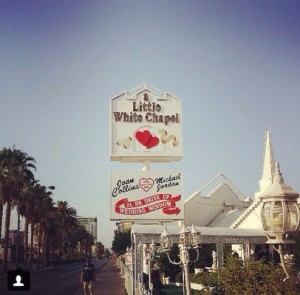 Of the dozens upon dozens of wedding chapels in Las Vegas, it is truly difficult to pick out the best.  However, in addition to the above, there are some standouts worth mentioning.  First and foremost is the Graceland Wedding Chapel which, while a bit cheesy, probably best epitomizes the spirit of Las Vegas.  The Wee Kirk O’ the Heather was the first chapel in Las Vegas, though it is not the oldest building.  Other popular sites are the Chapel of the Bells and the Viva Las Vegas Wedding Chapel.  The latter, one of the newest additions to the genre, is regularly counted among the best in Vegas.