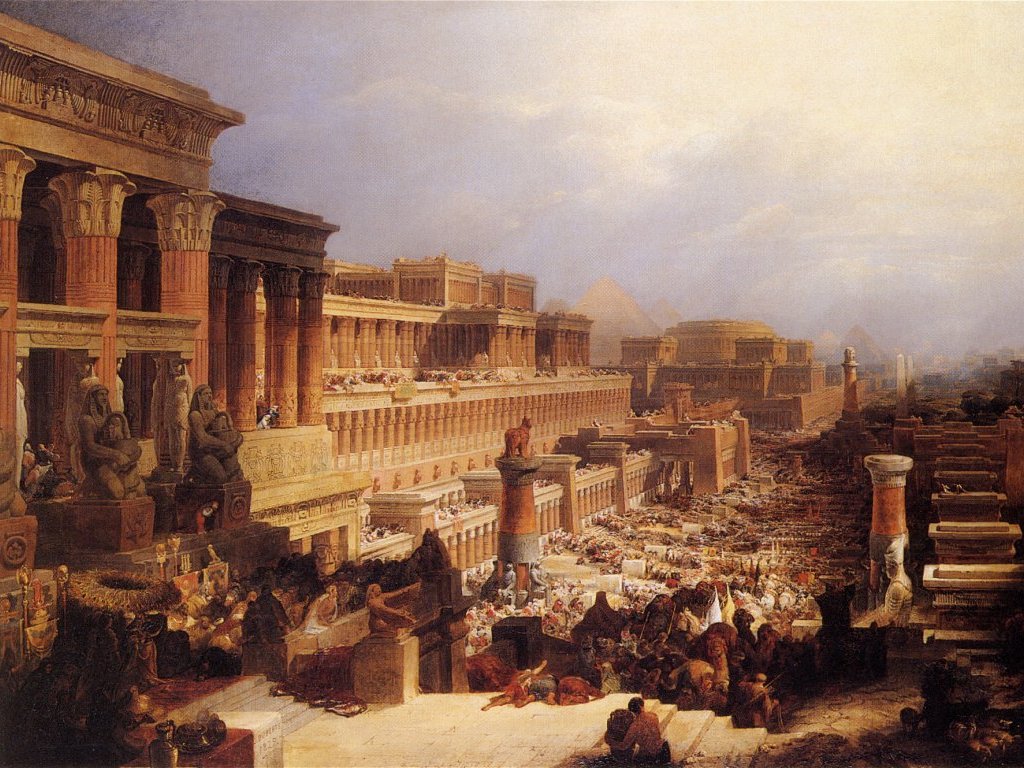 The Departure of the Israelites by David Roberts (wikipedia.com)

Akhenaten was one of Egypt’s greatest and most controversial pharaohs.  During his reign he established, among other things, a monotheistic religion around the deity Aten, pushing all other Egyptian deities out of public life.  It has been suggested that Akhenaten was strongly influenced by the ideas of the Hebrew slaves, and that the deity Aten (a sun god) may have been the Egyptian incarnation of the Israelite deity Yahweh.

The Egyptian people were forced to take up the exclusive worship of Aten, and while most did so unwillingly, there were many who did so enthusiastically in their bid to ingratiate themselves to the pharaoh.  But sometime around 1335 BC, Akhenaten died, and the worship of Aten died with him.

But religious beliefs don’t disappear overnight, and many stalwart worshipers of Aten survived Akhenaten’s death.  Interestingly, right around the time of his demise, Egypt was struck with several major natural disasters.  The followers of Aten were blamed, and worship of Aten was ruthlessly suppressed.  What happened to them?  In all likelihood they were enslaved and relocated to Northern Egypt.

That would have put them into close contact with the Hebrews, another monotheistic people.  It is not a stretch to think that thousands of Egyptians were absorbed into the Hebrew tribal structure at this time, thus swelling their numbers further.

The fact that there are some parallels between the natural disasters recorded by the Egyptians around this time and the plagues recorded in the Book of Exodus is not a coincidence.  The Hebrews claim that God punished the Egyptians for their enslavement, while the Egyptians claim that they were punished for the toleration of the monotheistic worshipers of Atep, and all around the same time.

Of course, besides the Hyksos and followers of Akhenaten, the Hebrew slave groups might have absorbed any number of other slave groups, invigorating them with new strength and fresh blood.  For that matter, many other slaves might simply have up and left with the Israelites when they were freed, joining the various tribal groups as the situation allowed.

So, when the Exodus finally took place, it was almost certainly a mass mix of peoples, absorbed into and organized by the Israelite tribes over centuries, that began the slow march across the Sinai desert.  The idea is certainly not impossible, and at any rate was not a violation of either the traditions of the time or of Mosaic law, which did not yet exist.