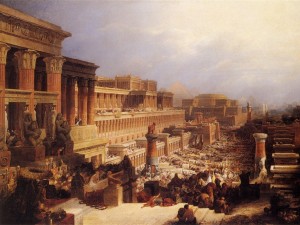 The Departure of the Israelites by David Roberts (wikipedia.com)

The Biblical story of Moses is one of the great narratives, if not the definitive story, of the Hebrew Bible (the Old Testament). It is a great personal favorite, and watching “The Ten Commandments” with Charlton Heston during Holy Week is a cherished tradition in many families.  Beyond the familiarity of the film is the Biblical text of course, which has been endlessly pored over by Biblical scholars.

A beautiful and inspiring story, there are nevertheless some difficulties, specifically concerning the math. The family of Jacob arrived in Egypt with around seventy members, and marched out again a little over four hundred years later with over two million.  Following are the relevant Bible verses:

“All the souls that came with Jacob into Egypt… were threescore and ten.” Genesis 46:26-27

“And the children of Israel were fruitful, and increased abundantly, and multiplied, and waxed exceeding mighty; and the land was filled with them.” Exodus 1:7

“Now the sojourning of the children of Israel, who dwelt in Egypt, was four hundred and thirty years.” Exodus 12:40

“And the Lord spake unto Moses in the Wilderness of Sinai… saying, Take ye the sum of all the congregation of the children of Israel…with the number of their names, every male, by their polls; From twenty years old and upward, all that are able to go forth to war in Israel: thou and Aaron shall number them…” Numbers 1:1-3

“These are those which were numbered of the children of Israel… six hundred thousand and three thousand and five hundred and fifty.” Numbers 2:32

To briefly summarize, the Hebrew community in Egypt probably began sometime in the 19th century BC with about seventy people.  The exact number is uncertain due to conflicting Biblical accounts, and in any event only appears to count the male descendents of Jacob.  Jacob had thirteen children (including Dinah), with 52 noted grandchildren, only one of which was specified as female, and four great grandsons who made the initial journey.

Using the 52 grandchildren as a starting point, we will make the most favorable assumptions possible.  First, that each of these had a spouse which was not specifically accounted for; second, that the 430 years allowed for twenty-two generations, or approximately twenty years each; third, that every single person of every generation was married and had at least three children that survived to adulthood.

Setting aside issues that include, among other things, the huge numbers of slaves that were worked to death or massacred over the centuries; inbreeding in the early years; and the considerably problematic census concerning the House of Levi, this very generously gets us to about three quarters of a million people. By contrast, at the time of the Exodus, the number of males of military age was just over six hundred thousand, suggesting an overall population of about two million.  Obviously, the best case scenario, which is incredibly optimistic, still leaves a significant shortfall.

So, the question is, if the numbers disclosed in the Bible are essentially correct, how did they get from seventy to over two million in such a short time?

The most reasonable, if highly controversial, answer is that the Hebrew slaves almost certainly intermarried with non-Hebrew slave groups.  While this is a definite possibility, the Bible is silent on the matter.  However, the Book of Genesis does offer support that this was, in fact, the case.

Specifically, Joseph, who was the chief figure in the story of the sons of Jacob, married an Egyptian woman (the daughter of a priest, no less).  This immediately legitimizes the theory that the Israelites intermarried with the Egyptians and possibly others.

Now we have to dig a little into recorded Egyptian history.  Egyptian civilization had already been around for well over a thousand years before the Joseph brought his family to settle in Goshen, and throughout almost all of that time they had lived in peace with the rest of the world.

But right around the time the Hebrews arrived, Egypt began an era when its world was turned upside down.  Invasion by the Hyksos, the threats of an expanding Hittite Empire, raiding parties of the fierce Sea Peoples of the Mediterranean, and the extremely odd reign of the Pharaoh Akhenaten, all converged during the centuries when the Israelites were in Egypt, and may have contributed greatly to Biblical events.

Around the time Joseph’s family migrated to the region of Goshen in the extreme north of Egypt, many other groups from Canaan and beyond were also migrating in, presumably due to the great famine which wracked the ancient world at the time.  These in turn probably helped to pave the way (at least culturally) for the invasion of the Hyksos in the 18th or 17th centuries BC.

It has been suggested that the arrival of the Canaanites and/or Hyksos helped to smooth the way for the acceptance of Joseph in Egypt.  These would have been familiar with the monotheistic traditions of the descendents of Abraham, if not actual practitioners, and the Hebrews would have served as excellent intermediaries between their distant relations and the Egyptians.

At some point in the 16th century BC, the Hyksos were driven out of Egypt.  It was about this time, some Biblical scholars believe, that the Egyptians turned on the Israelites, forcing them into a state of slavery.  Was it a coincidence that these events occurred at the same time?  Did the Egyptians associate the Hebrews with their Hyksos enemies, and turn on them with a vengeance when the Hyksos departed?

Almost as importantly, what happened to the Hyksos and Canaanites who remained in Egypt, as some certainly did?  After the defeat of the Hyksos army, perhaps many Hyksos civilians would have been left behind, along with Canaanites and even Egyptian sympathizers.  In the ancient world, this usually meant death, exile or slavery.

The Egyptians, eager to rebuild their kingdom and strengthen the land of Goshen at the northern approaches to the realm, probably turned on all of these groups with a vengeance, forcing them into a state of servitude along with the Hebrews.

So it is not unreasonable that these various slave groups became intermingled, with most ultimately adopting the customs and religious beliefs of the Hebrews.  This would have swelled the ranks of the Israelites considerably.  Within a few generations, they were probably all organized amongst the Twelve Tribes, indistinguishable in language or custom, and all worshipping the God of Abraham.

Then, in the 14th century, a new factor to the slave question was introduced, when one of Egypt’s most enigmatic and eccentric pharaohs appeared on the scene.