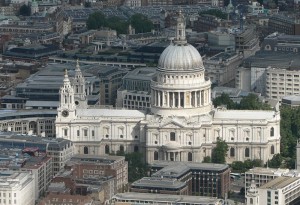 While Canterbury Cathedral is the seat of the Anglican Church and the mother church of all denominations within the Anglican Communion, it is Westminster Abbey, and to a lesser extent St. Paul’s Cathedral, that are the public faces of the Church of England.  Westminster Abbey, classified as a Royal Peculiar, has been the unofficial church of the English monarchy for the better part of the last thousand years.  During this time period the great majority of England’s monarchs were coronated here and/or buried here.  St. Paul’s Cathedral, the official cathedral of the City of London, was designed by the legendary architect Christopher Wren, who helped plan the rebuilding of London and many of churches after the Great Fire of 1666.  Together, Westminster Abbey and St. Paul’s Cathedral are by far the two most visited cathedrals in the British Isles.  Westminster Abbey is a UNESCO World Heritage Site.

The Collegiate Church of St. Peter at Westminster, or Westminster Abbey as it is more commonly called, began life long before the Church of England broke off from the Papacy in the 16th century.  An earlier structure had stood on the site perhaps as far back as the 7th century.  The current structure, built by Edward the Confessor, was consecrated in 1065 AD, just in time to see the end of the Saxon dynasty.  After William I conquered England in the next year, the abbey was effectively appropriated by the Normans and their successors, by whom it has been used for coronations, funerals and other royal occasions ever since.

Originally a monastery of the Benedictine order, the abbey’s proximity to the governmental center of England made it both incredibly influential and wealthy, and the position of Abbot of Westminster became one of the most important in the British Isles.  The 16th and 17th centuries were a period of great turbulence for Westminster Abbey.  In the 1530s, when King Henry VIII broke the Church of England away from the Papacy, he ordered all monastic orders dissolved, and all monasteries seized, looted and, in most cases, destroyed.  However, perhaps due to a sense of sentimentality, the king had Westminster Abbey declared a cathedral in order that he could spare it without a loss of face.

Over the next few decades, on the other side of town, Henry VIII and his successors began pillaging the decaying St. Paul’s Cathedral for building materials.  St. Paul’s Cathedral, the official cathedral of the City of London, had been constructed over two centuries following the Norman Conquest.  By the 16th century, it was in an advanced state of neglect, a situation that was not helped by Henry’s policies.  The next hundred years saw both cathedrals take a turn for the worse.  In 1561, lightning struck St. Paul’s Cathedral, destroying the spire.  Both buildings were badly damaged during the English civil wars of the 17th century.

In 1666, the Great Fire that swept through London effectively finished off St. Paul’s Cathedral.  Although the damage was not total, it was decided that what remained of the building’s shell be torn down and replaced by a completely new structure.  This was designed by one of the greatest architects of all time, Christopher Wren, and it was his signature achievement.  Since the early 1700s, history at both cathedrals has been significantly less exciting; though each would go on to host some of the world’s most momentous royal events.  In 1953, the last royal coronation, that of Elizabeth II, was held in Westminster Abbey.  Today, these two cathedrals are possibly the most visited in the world after St. Peter’s Basilica at the Vatican, and there is no sign of the hordes of annual tourists slowing down any time soon.

Considering its age, the Westminster Abbey is in surprisingly good shape.  Despite numerous restorations and a few additions, much of the Collegiate Church dates from the original 11th century construction.  Built in the tradition cross layout of the Middle Ages, Westminster is one of the finest examples of Romanesque architecture in England.  However, the architectural details of the church, as magnificent as they are, are generally overlooked by the majority of visitors who are simply too awed by the honor roll of those buried within.  Sixteen British monarchs are interred here, including such luminaries as Edward the Confessor and Elizabeth I, along with countless other royals.  A short list of Westminster’s other tombs include those of Robert Browning, Geoffrey Chaucer, Charles Darwin, Charles Dickens, George Handel, Thomas Hardy, Rudyard Kipling, Isaac Newton, Laurence Olivier, William Pitt and Alfred Tennyson, not to mention many of the abbey’s prominent clergymen.

St. Paul’s Cathedral, though perhaps of less historic interest, is by far the more magnificent of the two cathedrals.  Built over a relatively short time span, a little over three decades, St. Paul’s was completed within the architect’s lifetime.  Because of this it is one of the most architecturally harmonious cathedrals in the world.  Also laid out in a traditional cross shape, St. Paul’s is a Baroque (with a touch of Gothic) masterpiece on the order of St. Peter’s in Rome.  Its highlight, and one of the architectural highlights of England, is the cathedral’s magnificent main dome, one of the largest in the world.

Both cathedrals are located in extremely high-profile and tourist-saturated districts of London.  Westminster Abbey is located in the government area, close to the Houses of Parliament.  It is open most days from 9:30am-4:30pm, with late closing (7:00pm) on Wednsedays and early closing (1:30pm) on Saturdays.  It is closed on Sundays.  Admission is L12.00.  St. Paul’s Cathedral is located in the City, close to the Tower of London.  It is open Mondays through Saturdays from 8:30am-4:00pm.  Admission is L11.00.  Web: www.westminster-abbey.org (official site of Westminster Abbey); www.stpauls.co.uk (official site of St. Paul’s Cathdral)